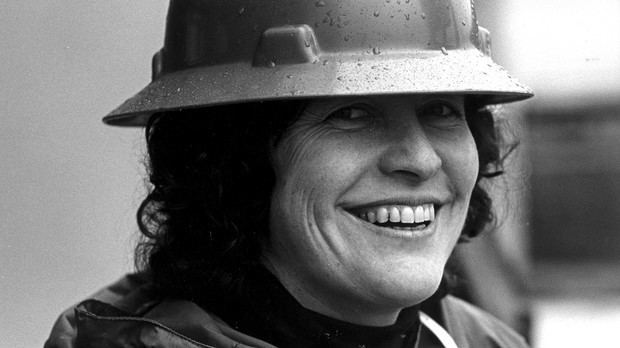 Oregon native Bonnie Bronson was known for how completely her art intertwined with her life. A  prominent painter and sculptor during the 1970s-1980s, she is largely an unsung artistic voice, often overshadowed by her renowned husband, Lee Kelly, who was known as “Oregon’s Sculptor”.
Bronson attended the University of Kansas, University of Oregon and graduated from the Portland Art Museum School (now PNCA, Pacific Northwest College of Art) by the age of 21. Within that same year, Bronson married Kelly and together they lived and worked on a former dairy farm near Oregon City. It was said of Bronson that there was no part of her life that her art didn’t touch, from rock climbing to gardening.
Bronson’s artworks featured enamel on steel sculpture, welded and painted steel collages, painting and carpet design, and were all considered a powerful force in the Pacific Northwest art community in her lifetime. Randal Davis, a Portland-based art historian and researcher with particular emphasis on Abstract Expressionism and Minimalism, remarked that Bronson’s work always showed “an abiding love for the sheer beauty of materials and a fascination with unusual structures and systems.” Davis also wrote a catalog essay that links Bronson’s work to a broad artistic sweep that runs from Jacques Derrida to Robert Motherwell and Donald Judd, in addition to her husband. She was often called a, “Messy Minimalist” and her work was not only visually stimulating but complex. The closer you got, the more cause you had to think.
Bronson actively exhibited throughout the Northwest, including a one-person exhibition at the Portland Art Museum and many other exhibitions at Marylhurst College. She was also commissioned for several of her permanent artworks at prominent businesses and institutions throughout the state and even received the Oregon Arts Commission Individual Artist Fellowship in 1978.
One of Bronson’s most famous works is “Kassandra”, believed to be named after her husband’s daughter. This fearlessly scaled sculpture is made up of five long sections that create a 10×24 foot bas-relief. The original was actually destroyed after its initial showing at Blackfish Gallery in 1980, but the piece on view at PNCA has been reconstructed, thanks to Bronson’s carefully recorded plans and drawings. Davis stressed the importance of structure, especially grids, an obsession kind of similar to the Minimalist movement. The sculptures remain wall-bound and essentially pictorial, they’re three-dimensional yet they still exist within the universe of the flattened plane. In addition, the paintings on display are thickly textured, straining toward sculptural status. Bronson’s primary grids, blocks, and segments are already in place.  Bronson also valued the relationships between color and material. One friend wrote in an essay about Bronson saying the latter could force beauty out of the earth or steel or paint.
Bronson and Kelly lived and worked out of their Oregon city home until her untimely death in 1990. While on Mazama Glacier in Mt. Adams, Washington, Bronson sadly died in a mountaineering accident while hiking with her husband.
Bronson’s name has been successfully kept alive through the Bonnie Bronson Fund award, which has been given to one Oregon artist each year for 28 years already. The Bonnie Bronson Fund was created by family and friends in 1992 with the purpose of publishing a catalog documenting Bronson’s work and life, and also to award an annual fellowship. This is to encourage creative and intellectual growth in working artists of the Pacific Northwest region, specifically Oregon and Washington. Artists don’t need to apply for this award since the selection goes through a confidential nomination process. In 2011, an exhibition of the Bronson Fellows’ works was held at the Ronna and Eric Hoffman Gallery of Contemporary Art, Lewis and Clark College, celebrating the 20 years of the Bonnie Bronson Fund. A full-color catalog was also published online. A retrospective of Bronson’s artwork, called Bonnie, was also hosted by the PNCA in the same year.