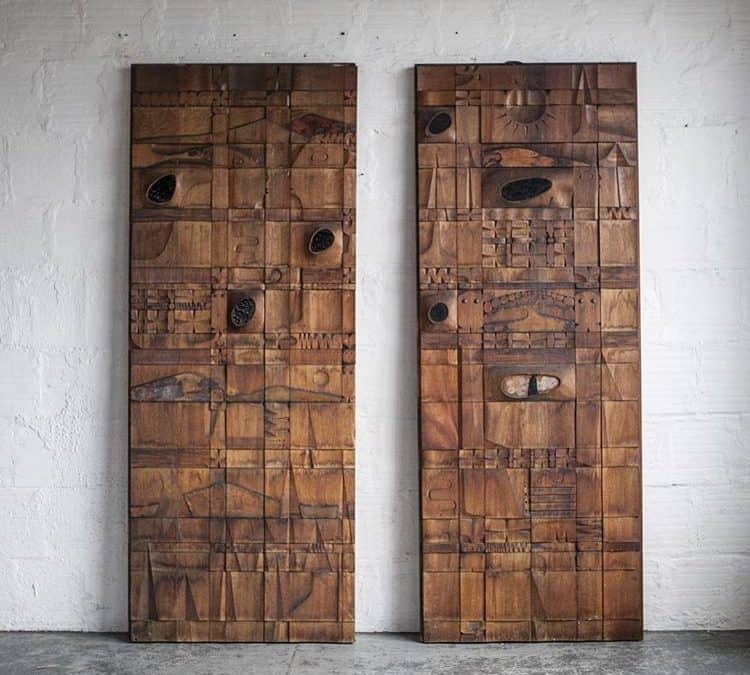 Leroy Setziol is recognized as the most accomplished and respected wood sculptor in the Northwest United States, however many of his pieces are unaccounted for. Almost 11 years ago,Years ago, I featured the restoration and sale of a Frank Shell designed home near Multnomah Village, when I noticed the unique front door. While chatting with the (then) current owner, he recalled the door being a gift from a local artist who also carved many  panels featured at Salishan Lodge. Upon research and a visit to the lodge, I learned the door was carved by none other than Leroy Setziol.

Looking back, this discovery marked the beginning of my slight obsession with Setziol’s work.

Setziol’s artistic career began with an interest in Native American iconography. He moved with his wife from New York to Portland in 1951, where he discovered a passion for Native American sculpture and woodwork. He reflected:“The genius of native sculpture is their ability to approach the myth that lies beyond the bear or fish to say something about existence. As an artist, I don’t recognize any distinction between us… People who work with clay totally dominate their material, but you can’t do that with wood. Working with wood is a much more sensual experience. With wood, an artist is halfway home.”

The couple and their daughter lived on a 22-acre orchard in Sheridan, Oregon where they planted dozens of trees including black walnut, Alaska yellow cedar, chestnut, redwood, Japanese black pine, pin oak, locust, giant sequoia, and Thai teak. Interestingly, the trees planted were not intended to source Setziol’s artwork, but he provided young, local sculptors with free materials.

Of the (assumed) hundreds of carvings Setziol created throughout his career, his most famous project is the 13 hand-carved teak panels in the Salishan Coastal Lodge dining room. Setzoil was commissioned by Northwest Regional Architect John Storrs. The scale and success of this project influenced commissions by many of Oregon’s leading architects!Interestingly, in 2019 the resort commissioned an art piece by his daughter, Monica Setziol Phillips. The general manager, Ryan McCarthy, told Oregon Live they are aiming to “link the past to the future” throughout the historical lodge.

Although his work was featured for a brief time at the Portland Art Museum in 2016, Leroy Setziol’s work is most often found in the homes of private collectors. In addition, many of his sculptures have been discovered under, and in, unique circumstances. The Portland ReBuilding Center (RBC) received a geometric-carved door as a donation in 2004. The RBC employees admired the door but were shocked to learn they were in possession of a long-lost Setziol sculpture. The artwork was officially confirmed to be an early Setziol piece by his daughter Monica Setziol Phillips that year. It seems a perfect metaphor for the nature of Setziol’s approach to art and underrated, legacy in the PNW art scene.

Setziol once humbly said that a wood artist has an advantage over other artists because, even if someone dislikes his artwork, the material is still desirable.