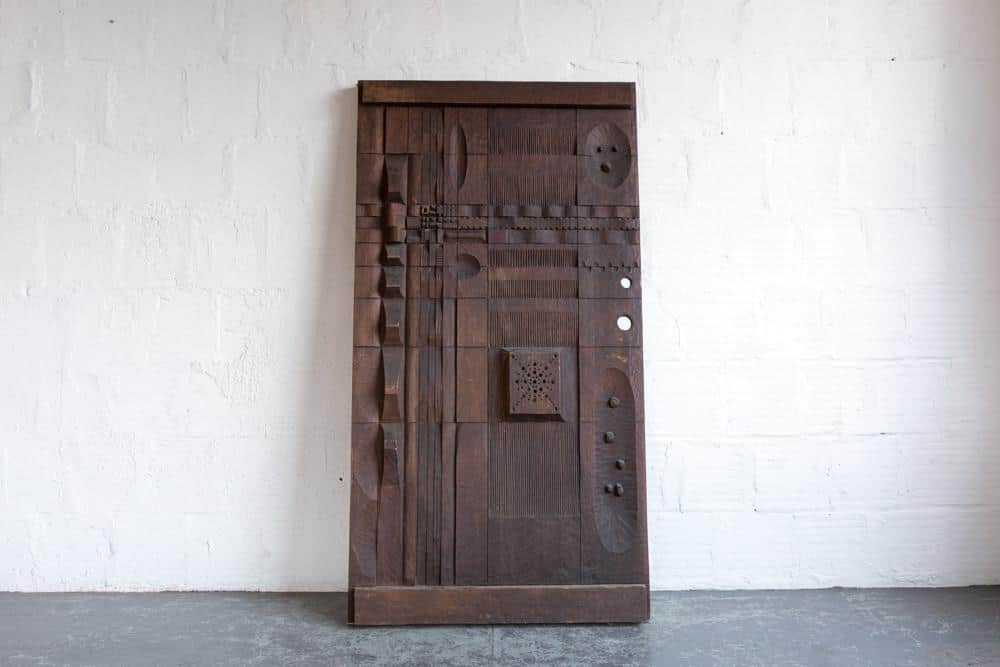 As some of you know, I have been reporting on the progress at  the Frank Shell house, from short sale to bank owned and now saved and being restored by a skilled contractor with an eye for the architects original vision. I was always very curious about the front door to the home (pictured above). It is obviously hand carved and very much an original piece of  mid century art. While chatting with the current owner a while ago, he mentioned that the door was carved by a local artist friend of Shells that gave this door to the Shells as an anniversary gift and that artist had done carvings that were featured at Salishan. As luck would have it, I was at that very moment less than a 2 minute drive to the Salishan Lodge, so I grabbed my camera and went on a lodge tour (above photo is not mine). The lobby, restaurant and stairs leading to the lounge are filled with huge wooden panels that were hand carved by this artist whom I found out is Leroy Setziol.

“Recognized as the “most accomplished and respected wood sculptor in the Northwest,” Roy Setziol was born in Philadel phia and grew up in cosmopolitan Buffalo. After graduating with a degree in art from Elmhurst College he married Ruth Davis in 1940. In 1941 he completed a theological degree and then worked as a minister in Bennington, New York. During WWII he served as a chaplain with the U.S. Army 43rd Infantry in the South Pacific. Soon after the war he joined his family in Portland, Oregon.

With Ruth supporting the family Roy began his career as an artist. Setziol’s art has been influenced by his experience interacting with the immigrant communities in Buffalo, the art he observed in the South Pacific, his personal interest in European art, and his experience living in the Northwest. He is a “sculptor who happens to work with wood,” in part because of the ready availability of the material in Oregon. Long admired by the architectural community, his work has been described as monumental and intimate, sym­bolic and abstract, geometric and organic. It is rich in color and texture with many of his pieces employing a grid system he discovered nearly 40 years ago carving a piece for the Menucha Conference Center in the Columbia Gorge. Roy has been commissioned for an extraordinary number of public pieces including those that can be seen at the Salishan Lodge, the Salem Public Library, the Child Development Center in Portland, the Chevron Building in Lagos, Nigeria, and at Timberline Lodge on Mt. Hood. His sculptures are also in the collections of the Salem Art Association, the Hallie Ford Museum of Art, and the Contemporary Crafts Museum and Gallery.”

From his Salem Art Association biography.

Now that I can identify Setziols work, I can easily recall having seen it before and that explains why the Frank Shell door was something that felt so familiar.  See below for more photos of Setziols work and check out the Oregon Artbeat feature on the local artist from 2001.