Keep on Eye on Waechter Architecture 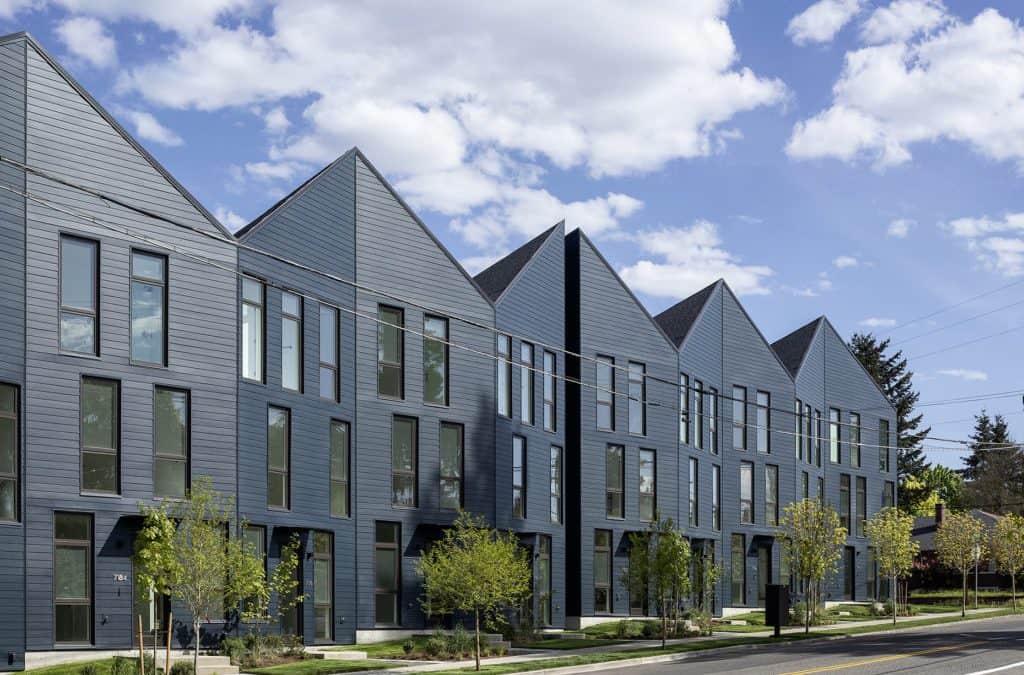 Ben Waechter is the principal architect, designer and founder of Waechter Architecture (W.A.) in Portland, OR. The firm has completed a variety of projects in the Pacific Northwest – from commercial buildings, hospitality to residential, both single-family as well as multi-family housing. Waechter received a BArch from the University of Oregon, where he currently teaches. Before Ben founded W.A. in 2007, he worked with many leaders in architecture including Allied Works Architecture in Portland, OR, and world-renowned architect Renzo Piano in Genoa, Italy.

Waechter’s projects are known for their conceptual and formal clarity. As stated by Ben about his firm philosophy, the power of architecture is “to distill the clutter of the every day and reveal the underlying relationships and potentials of inhabitation.” The firm approaches each project with an open mind and by taking the time to understand the unique character of a site before jumping in. 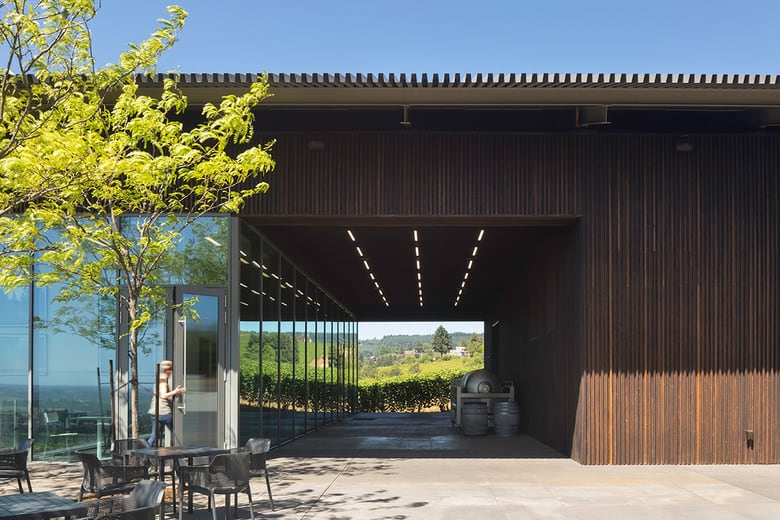 Some of their well-known commercial projects are the Furioso Vineyards (2018) and The Society Hotel Bingen (2019). Located in Dundee, Oregon, the Furioso Vineyard was established in 2014 and occupied a simple barn building with red siding. After the renovation by Waechter in 2018, it acquired a new bold personality. With its charred cedar screens and glass walls, it lures in customers to enjoy a glass of wine and check out the panoramic view of the vineyards and the Willamette Valley. The aim of the project was to transform the existing winery while highlighting the breathtaking surrounding landscape. Features of the vineyard now organically work together creating a distinct atmosphere.

The vineyard consists of a renovated winery, new tasting room, barrel room, equipment area, covered crush pad, and a concrete piazza. W.A.’s design responds to the unique qualities of the site. For example, the vineyard has some of the oldest vines in Dundee that extend deep into the volcanic rock below, so the design is focused on the exterior space. The neutral color palette is also reflective of the vineyard and the wine. With its’ open floor plan, the tasting room connects visitors to the history of the land and the winemaking process. Positioned to feel as if it is hovering above, it gives the tasting room the feeling of an intimate living space within the vineyard. In 2019, Furioso Vineyard won the Gray Award for Commercial Architecture. 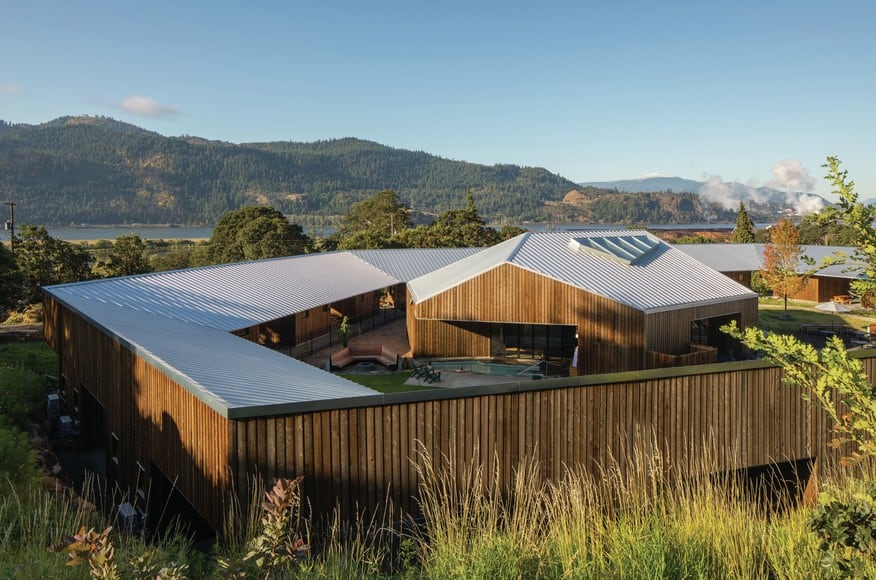 The Society Hotel Bingen was Waechter’s first hotel project. Opened at the end of last year, the Society Hotel Bingen is located in Bingen, Washington, on the scenic Columbia River Gorge. Previously used as a schoolhouse and gym in 1937, Ben and his team adapted the 20,000-square-foot space into a lodging and recreational destination for visitors and local residents. They designed a covered pathway, sanctuary, a spa and bathhouse building. What is distinctive about the design is that it takes elements from the former gymnasium such as fir tongue and groove paneling, and incorporates it into other areas of the hotel. Another element taken originally from the schoolhouse is its’ dark blue coloring, now used in the guestrooms.

The primary design element of the site is the 20 individual cabins that are built within a hexagon-shaped ring. This form helps to create a sense of privacy for each neighbor while maximizing views of the surrounding nature. Another interesting element is that all cabins share a roof that extends to shield a walkway, which provides each cabin with its’ own private outdoor space as well as a shared courtyard. Waechter notes that “the covered walkway guests are able to move between cabins regardless of the weather”. At the center of the ring is a new spa and bathhouse building, which creates a central gathering space with a shared saltwater soaking pool, sauna, hot tub, cold plunge, and a café. 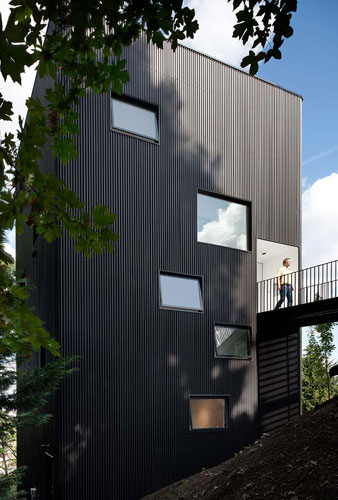 Among Waechter’s popular residential projects are the Tower House (2014) and Origami (2019). The former is located in the West Hills of Portland. With its panoramic views of the city and mountains to the north, it is an excellent example of Waechter’s style. To minimize the environmental impact on the steep, tree-lined site, they “built up, rather than out”, in order to reduce the foundation cost and limit disturbances to the sloping site. The 2,400sqft. four-story rectangular volume was built on a 600-square-foot footprint. The wood-frame house sits on a concrete foundation, which is supported by steel underpinnings that were drilled into the hillside. The house can be accessed by a thin steel pedestrian bridge that leads to the mid-level of the house where the dining room is.

In 2019, the Waechter Architecture completed a new residential development in Portland’s Piedmont neighborhood – the Origami. Comprised of 12 wood-framed town-homes, the development occupies a full city block on a busy residential street. W.A. created a simple design strategy in order to meet construction and budget needs of the site, while at the same time making sure that they created a unique and coherent architectural appearance. As Ben says, they “wanted to avoid a strategy of either fragmented individual buildings or a monolithic block”. Instead, their design was inspired by the process of origami, in which a single sheet of paper can be manipulated through folding to produce more complex figures. They used this concept of origami to shape a roofscape that connects the facades of each unit. All the buildings share an internal court in the back but each residence has its own private space and parking.

Many of Ben Waechter’s projects have been recognized by the Portland and Northwest and Pacific Region chapters of the AIA. In 2016, they received a Design Vanguard award from Architectural Record and two ‘Best of Design’ awards in the 2019’s Architect Newspaper.

To check out more projects by Ben Waechter, click here. 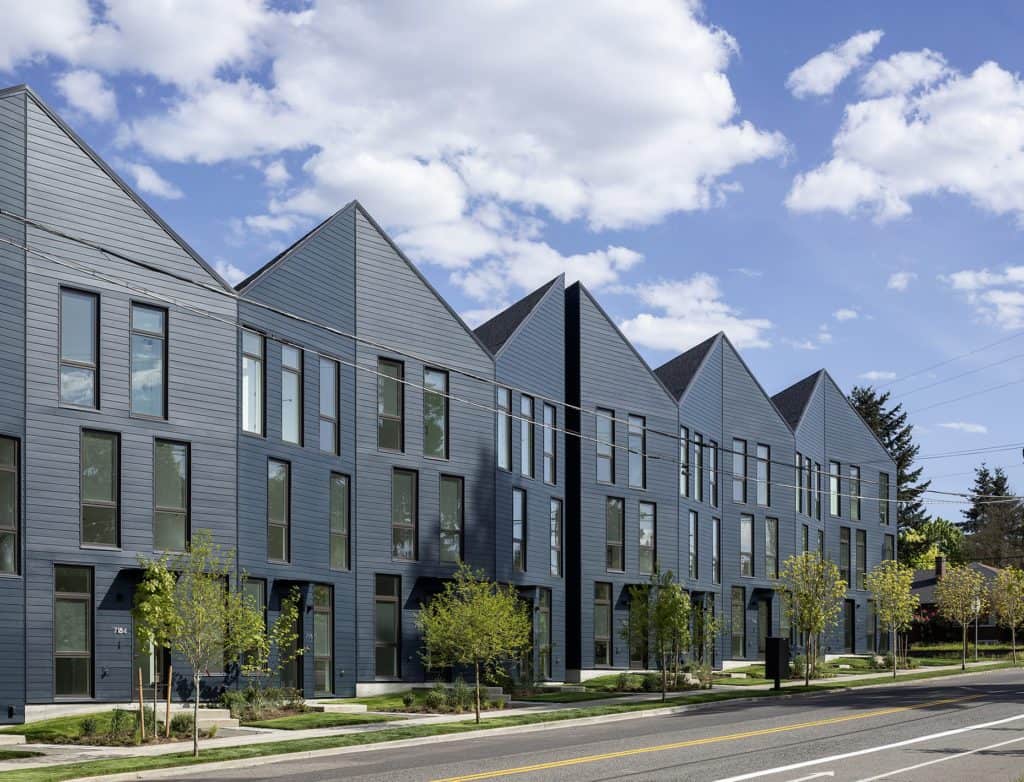