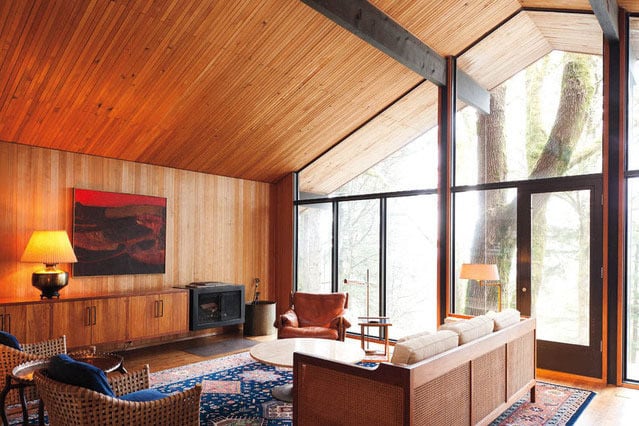 Here in Portland, there is nothing retro about mid-century modernism. In this corner of the world, it stands the test of time and is dominated by prolific figures who take the query of integrating architecture and nature to another level. A giant among men is Saul Zaik, who began his practice in 1956 and continues to be energetically engaged in his profession to this day.

“I think people have to learn a little more about how they want to live in a house,” he said during a recent interview with Coast Modern. Zaik’s deceptively simple style, discreet designs for those who want to connect with the outdoors, creates ample space for contemplation of that very question. He was part of a postwar generation that wanted to change the idea of architecture; he just did it with a little more reserve than most.” – Patrick Sisson, curbed.com

A Portland native, Zaik came into architecture through drawing. After serving as a naval radio operator in the South Pacific, he returned to the Pacific Northwest and enrolled in the University of Oregon’s school of architecture via the GI Bill. Upon graduation in 1952, he quickly found work with all the biggest names of the NW Regional movement: Belluschi, Blair, Fletcher and more. He was an integral part of the group of architects infamously referred to as the 14th Street Gang, credited with helping popularize modernist design in the Pacific Northwest. To this day, Saul Zaik’s presence continues to influence the region. Read more about this design giant here or watch him in this interview by Coast Modern here.

Northwest Regional Modernism reached the height of its popularity between 1935 and 1960. The most famed architects associated with the movement pulled heavily from the teachings of the Bauhaus movement combined with Japanese aesthetics, a climate complimentary to the Northwest region. The style is defined by the post and beam construction techniques that were essential to building on rugged and often steep terrain, floor to ceiling glass windows, open floor plans, minimal decoration and low slung silhouettes intended to blend in with the environment.

Many of these elements are making a comeback these days, particularly in the use of unpainted wood, generous windows, and clean modern lines.

The most striking element of this endemic modernism is that every detail has character and purpose and is deeply reflective of the surrounding nature. If you are as sold as I am on the beauty of Northwest Regional Modern homes, keep tabs on this section of my website, updated as often as these beautiful homes become available.