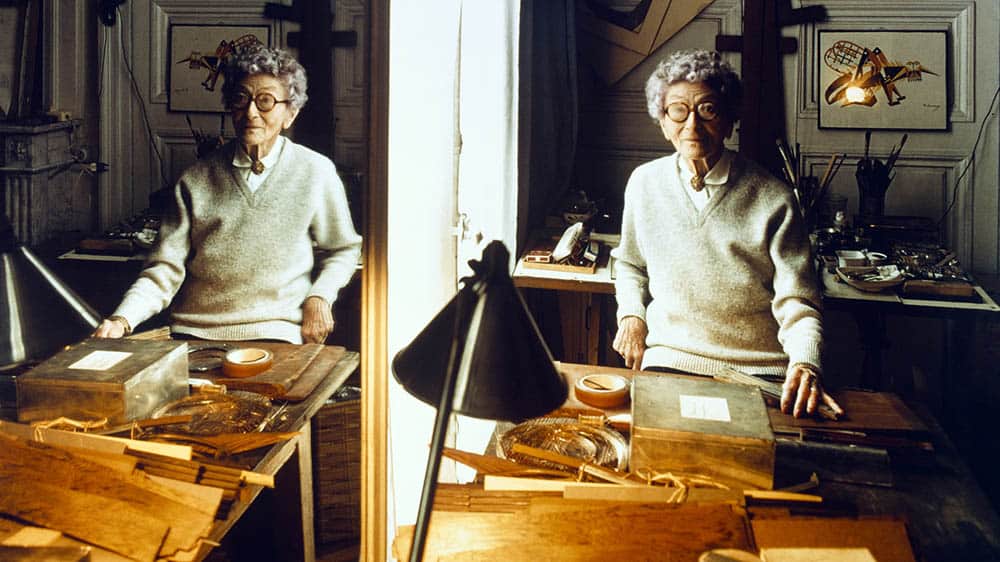 In some circles, Irish-born Eileen Gray is the figurative “poster-child” for the 20th-century woman whose work is dismissed by a male-dominated culture. These days, her pioneering designs are revered. The New York Times claims “Gray is now regarded as one of the most influential architects and furniture designers of the last century.”

Eileen Gray (born Kathleen Eileen Moray Smith; 9 August 1878 – 31 October 1976) was an Irish architect and furniture designer and a pioneer of the Modern Movement in architecture. Over her career, she was associated with many notable European artists of her era, Kathleen Scott, Adrienne Gorska, Le Corbusier, and Jean Badovici, with whom she was romantically involved. Her most famous work is the house known as E-1027 in Roquebrune-Cap-Martin, France.

Gray visited a number of different countries in her youth, including Italy, Switzerland and, above all, France, and particularly Paris during the 1900 World’s Fair. She then moved to London, where she was one of the first female pupils to be admitted to Slade School of Fine Arts (1901), before continuing her studies in Paris (1902-1905). Back in London, Gray worked for a furniture workshop in Soho. Dissatisfied with her designs, she focused on lacquering furniture, a discipline she perfected in Paris, working with the great Japanese master Sugawara for four years. She moved permanently to Paris (1907) and began applying her painting techniques to flat surfaces. She did not meet with great success at this early stage in her career, though some of her lacquers were purchased and exhibited (by tailor Jacques Doucet, for instance) and the British edition of Vogue published an article on her (August 1917).

Eileen Gray may be best known for her furniture designs, beginning her career as a lacquer artist.  “In her lacquer work and carpets,” writes the National Museum of Ireland, “she took traditional crafts and combined them in a radical manner with the principles of Fauvism, Cubism and De Stijl.” The museum goes on to claim that Gray was the “first designer to work in chrome,” and was working with tubular steel at the same time as Marcel Breuer Aram Designs Ltd. of London licenses Gray reproductions.
In the early 1920s, Romanian architect Jean Badovici (1893-1956) encouraged Eileen Gray to begin designing small houses. One of them is E-1027-collaborated with Jean Badovici on Maison en bord de mer E-1027, Roquebrune Cap Martin, on the Mediterranean Sea in southern France.

The alpha-numeric code symbolically wraps Eileen Gray (the “E” and “7” the letter of the alphabet, G), around “10-2”- the tenth and second letters of the alphabet, “J” and “B”, which stand for Jean Badovici. As lovers, they shared the summer retreat that Gray called E-1027.

Full international recognition of Gray’s work came late: in 1968, when the designer had retired far away from the architecture and design establishment, an article by critic Joseph Rykwert published in Domus reassessed her importance. Marco Orsini’s documentary Gray Matters (2014) examines Gray’s body of work, making the case that “Gray matters” as an influence in the design world. The film’s focus is on Gray’s architecture and designs, including her modernist house, E-1027, and the furnishings of the house for herself and her Romanian lover, “The E1027 story is now widely known and taught in architectural schools, as emblematic of the sexual politics of modern architecture,” claims reviewer Rowan Moore in The Guardian.

Read about another game-changing woman in the world of midcentury design here and stay tuned for more here at modernhomesportland.com